A couple notices before we resume our business here..

1. To my brand new readers:- Welcome!

I do advise you to read my last post, Energy before you start reading this, because this starts off right where I left things last time and WITHOUT preamble. If you continue reading this without reading the one prior, you’ll be like….

2. To the old faithful:- Welcome back!

Previously on The Pensieve…..

(Well if you guys really thought that I was gonna do a recap just so that you could simply laze around, then you were wrong! Just go through my previous post if you’ve forgotten it, won’t you?)

Now, assuming that you’ve refreshed your memories, we come back to the question we got stuck at.

How can Chemistry tell us good from bad? Or can it, even?

It’s been two weeks since my last post. So, surely you guys must have thought of something. Right?

I hope so. Because I’m no fan of spoonfeeding. Okay, let me start with some obvious guesses.

1. The nature of the reaction. :– Seeing that any reaction represents a change in our life at some level or the other, shouldn’t it be gradual and difficult with a complicated formula like our life?

Maybe. But that’s not the answer.

Let me explain why, starting with some myths which are prevalent owing to some statements. Such as:-

Well if that’s the case, then is methamphetamine a ‘right’ substance? – Because it does seem very tricky to make and requires a LOT of hassle to collect several of it’s ingredients.

Sarcasm aside, several times it does hold true. The right way may not be easy. But sometimes, it can be as well. Why complicate things for no reason? 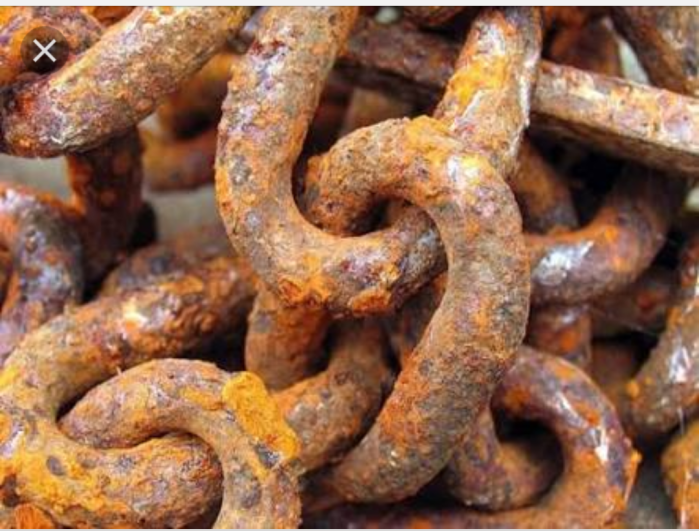 Really?! Then why does rusting, an extremely slow AND steady chemical reaction end up in destruction?

Also, a seemingly explosive reaction can result in an excellent positive result. For eg: The formation of water by combining Hydrogen and oxygen. The reaction is difficult to initiate (it requires a catalyst such as a Platinum/Palladium plate) and is violently aggressive once initiated. But does that make the end result (water) bad? Absolutely not!

So it’s not always necessary to be slow and steady to achieve success in life. Sometimes you have to take action immediately.

One can argue however, that above mentioned examples are exceptions and that ‘in general’ the rules do apply.

But what chemistry also teaches us is that there are exceptions. To every rule ever thought of by mankind. You don’t even have to read the entire textbook to know it. They are abundant enough. We see the same thing in and around us. People are full of exceptions. So are our interactions. And that’s precisely why we shouldn’t ‘GENERALISE’ our interpretations.

What do I mean by that?

What I mean is that we compare the qualities of the product and determine whether they are better than our reactant. This is better done prospectively than in retrospect. That’s where the ‘analysis’ portion of our energy should be spent upon.

Well, if that’s your guess, then you are definitely close. And partially correct. But that’s not the answer again.

Simply because, like I said earlier, there are exceptions to everything out there. The result which you’ll get might not be as good as what it seemed to earlier. An innocent appearing substance can be lethal as well. While a dangerous-looking substance can prove to be a life saver.

Let’s start with the innocent guys, taking water as the example.

Ever heard of OD?

Overdose, that’s right. Used usually in connection with drugs having abuse potential, overdose of ANYTHING in this universe can be lethal. Yes, even water.

Overhydration of the body causes loss of essential electrolytes leading to complications which can result in death.

You might argue that everyone has that much common sense so as to not drink so much water. Okay. Then let’s take things up a notch. Think Big.

Does that look familiar? So now you get my point, right? Too much of anything can’t be good.

As far as dangerous looking substances are concerned, there are a lot of examples out there. Such as drugs. In minute quantities these potentially lethal compounds can save lives if used the right way. But in higher quantities, of course they can lead to your infamous OD poisonings.

In the above examples, what was the common factor that brought about such a contradictory difference in the result?

A better way to put it (since we have been all ‘chemical-y’) would be…. An Equilibrium.

(Sigh! Yes, yet another definition…..)

In a chemical reaction, chemical equilibrium is the state in which both reactants and products are present in concentrations which have no further tendency to change with time. Usually this state results when the forward reaction proceeds at the same rate as the reverse reaction.

The definition clears several misconceptions at once. Because if we are looking for an equilibrium, then:-

1. The reaction NEVER gets completed. There’s always some product AND some reactant remaining. Which may or may not be interconvertible.

2. Establishing an equilibrium is impossible in our real lives.

Equilibrium can only be established in a closed system. i.e. in a system where there’s no further disturbance from the external environment. Is it ever possible for us humans?

Yeah. If you do this…

Meditate for an eternity.

And even then, there will always be those inanimate surroundings and the tiny creatures which call that surroundings their home. Or…. There’s a worser, finite option….

Know what I’m talking about?

Yup. You got it. I’m sure you must have had a shiver running down your spine by now.

(Wow! I didn’t know I could write some sinister stuff! Kudos for me!)

Surely as hell, we don’t want that. So what do we do now? I mean what’s the point in learning about equilibrium if we know that we are NEVER going to be able to accomplish it?

This is where we learn about something called as an ‘ideality’.

It’s something that’s so perfect that it can never exist….

If you’ve ever opened your Maths and Science textbooks you would know that there are literally infinite examples of an ‘ideal’ this or ‘ideal’ that. The point is, that there’s ALWAYS some correction, some margin of error which scientists are desperate to minimize.

That’s what we have to do as well.

That’s where we get it all wrong.

We are NEVER supposed to be ‘ideal’ or ‘in equilibrium’.

The reactions in our lives are on going and ever lasting simply because one cannot exclude themselves from their surroundings. So the conversion from a reactant to a product is an eternal, reversible reaction which ALWAYS has an ‘equilibrium’. The ideal midpoint.

If you are close to it, you are defined by the society (or your own self) as ‘Good/Right’.

And if you are away from it by a particular limit, the same society/self defines it as ‘Bad/Wrong’.

And that is precisely why a catalyst can be vicious if used incorrectly. Because a catalyst speeds up a reaction in a particular direction. So what if it’s speeding you away from equilibrium? Then all that energy would go to waste, wouldn’t it?

So now if you think carefully, there’s only a couple of things that set the course of your life. You and your external environment. Both of which are tightly knit and co-dependent.

Remember how our elders always warn us to stay away from ‘bad company’?.

They are right, aren’t they?

Because one way or the other, those interactions are somehow going to affect the way you think. Even if you think that you are too strong to be gullible to such environment, truth is that at the end of the day, you end up wasting a certain amount of energy on simply counteracting the opposing forces.

What’s the point in doing that, when you could be constructive and use the same elsewhere?

In the end, it’s always upto you.

Because no matter in which company you stay, which environment you are exposed to, there’s this eternal and inevitable flow of energy all around you. And YOU get to decide how to harness it. You may not be able to create energy, or decide from where and how you get it. But how to dispose it…. That’s something that’ll always be yours…. Untill the very end.

When it comes to change, you really don’t have to try to change yourself into someone else. Because not only does that take more energy, it doesn’t last long and takes you away from the equilibrium. You just have to change you into…. ‘You‘

That’s the eternal goal of life. To try being your ideal self (Your ideal, mind you. And not some role model.) , while knowing full well that you are never going to be able to do that.

But maybe, just maybe if you try, you’ll be close enough….

Before I dismiss this class and you go back to your peaceful slumber, I’ve a request.

Please feel free to leave some feedback. Be that positive or negative it really doesn’t matter. So that I can get my ‘energy’ back and I’ll put it to right use! 😉

It really helps. Like I’ve received feedback that my posts are too long. I’m sorry about that. Just bear this last one and I promise to try writing shorter posts from next time. And also someone said that the brackets irritate them….

(I’ve tried decreasing them this time. Tell me if it worked!) 🙂

Also, you might have realised that this concept is remarkably similar to what the Chinese call ‘Chi or Qi‘ and Indians call ‘Chetna’ or ‘Vital Energy‘. Yeah. I did derive inspiration from them, although this article was the brainchild of my own thoughts. If you want to read further into this concept, I do suggest researching Chi/Chetna.

Untill next time! See ya!