Note:- This post is crudely divided into two parts. The first part deals with the ‘inspiration’ behind this post followed by a brief introduction, while the second part is the main story. An experiment by my side…

(Oh, and BTW, if you were wondering why this post looks familiar to you, that would be because….

This post was originally published on this website on 8th February 2018 and has been reblogged today simply because the site had been sitting idle for 3 weeks. And I thought that it might be an interesting read for the newbies.)

A tale behind ‘the’ tale…

So here I was, having freshly completed my latest post, when I suddenly realised that I had no leads as to what I would be writing next, as is mostly the case anyways. Usually, this does not bother me as I rely on that sudden burst of inspiration that strikes me from time to time. However, the issue is that it only strikes me from ‘time’ to ‘time’, so I never know when I’ll be having the next episode of ‘writing jitters’ (as I like to call them).

Plus, back then, I had come up with this my new year resolution of trying to be more regular. Obviously, that meant that I had to try breaking this age old tradition. So I came up with this idea of asking a few of my trusted readers. I did get a couple of suggestions, but my brain didn’t really seem to be interested in writing ‘on a topic’ and insisted on coming up with something by itself.

(How the hell did I score good in school essays then, huh? Ah, those good old days….)

Soon, I found myself immersed in reading some of my fellow bloggers’ scribbles, eager to see what they had written. Out of the many good posts in this vast ocean of wordpress, one stood out, nagging my mind and stretching my imagination.

That post shared a happy childhood memory of a girl regularly spending her vacation with her parents at a picturesque lake house. I’m sure that we all have such a place that we hold dear. Also, the author had an interesting point to prove…

She had begun the post with a photograph of that very lake house and the fact that where all of us could only appreciate the beauty of the scene, she could see her father, their interactions and the memories which they had built in that very place over a period of several years.

And that got me thinking that even though Google defines a photograph as:-

‘ A picture made using a camera, in which an image is focused on to the light-sensitive film and then made visible and permanent by chemical treatment, or stored digitally.’

Is that the only thing that photography is all about?!

I mean, didn’t this author already prove what photographs were capable of?

Photographs convey so much more than just a few colours and figures. They tell us…. A story of their own.

And that, my friends, brings us to the second part of this post. Conveying the depth of photography with the help of a few photographs that I have clicked with my DSLR over the past few years.

People often asked her who she was. And more often than not, she didn’t know what to say. But today, as she sat all by herself in the park, she felt like she knew the answer.

She was a squirrel. 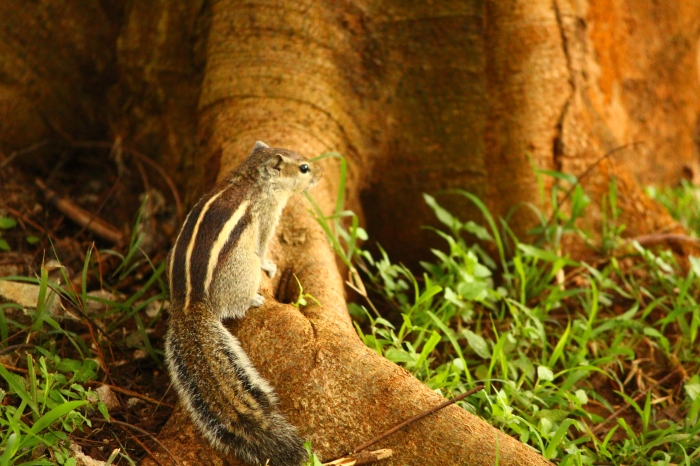 The infinitesimal tranquility before the inevitable scurry

Like that tiny creature perched on the root of that big tree, she too went about her busy life, doing what she always did. Thriving. Scurrying from one place to the other, never thinking twice where she went, yet being smart enough and running away at the smallest inkling of danger. Not today, though.

Tears welled in her eyes as she passed another glance at her cute, furry companion and was surprised to find it unusually still, almost as if it was reassuring her. Here she sat, on a metaphorical crossroad and so did the squirrel, albeit on a literal one as it seemed to decide which tree would be the best to climb. A smile crept to her lips as the squirrel seemed deeply in thought and unable to decide it’s path. So unlike itself. And so like her.

This had all been so unfair! She had simply been trying to live her life as she always did, never once attempting to harm anyone. Yet life had presented her with a situation that had caught her off-guard, her heart taken completely by surprise. Just like….

Just like those deers who stood there in the distance, with their ears perked up at the sudden noise of a broken twig, glancing intently in that direction, as though frozen and not knowing what should be the next logical step except to stay alert.

She looked at her side, expecting to find the squirrel still there. To her disappointment, it had gone on it’s way, probably having made it’s mind as it did so. Was there no one to comfort her? Atleast the deers had each other for support, she thought, before her eyes landed on a lone fawn, standing all by itself. Yes. She could definitely empathise with that poor creature.

For she had never felt so lost as much as she did today, feeling trapped and orphaned by the complexity and magnitude of the problem that life had presented her with. And there was nothing that she could do. Except… merely reflect on her past, like the crane who seemed engrossed in studying it’s own reflection. 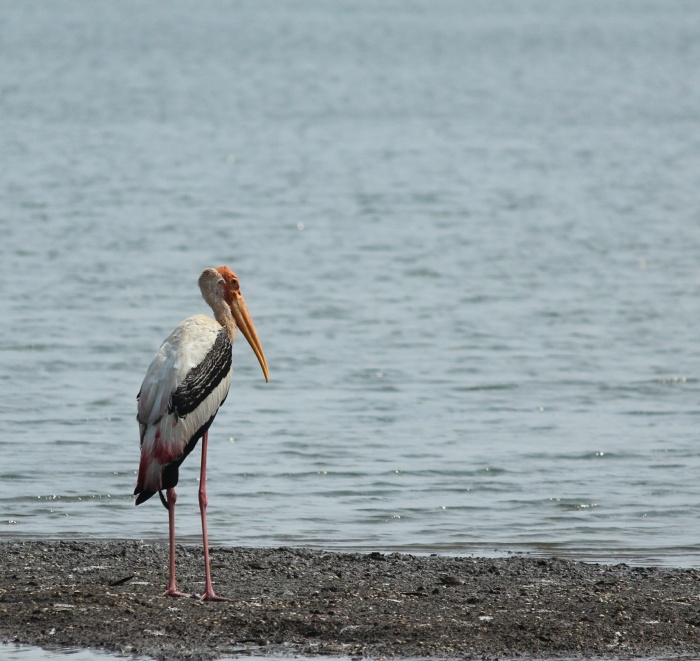 Where had she gone wrong? What had she done to deserve this? She couldn’t help but relive her memories and try to find the smallest piece of reasoning which could possibly explain the dramatic turn of events her life seemed to have taken….

Was there no hope for her?

Would this never end?

As though in answer, the clouds chose this particular moment to gradually drift apart. Infinitesimally. But it had been enough for the sun to shine through…. 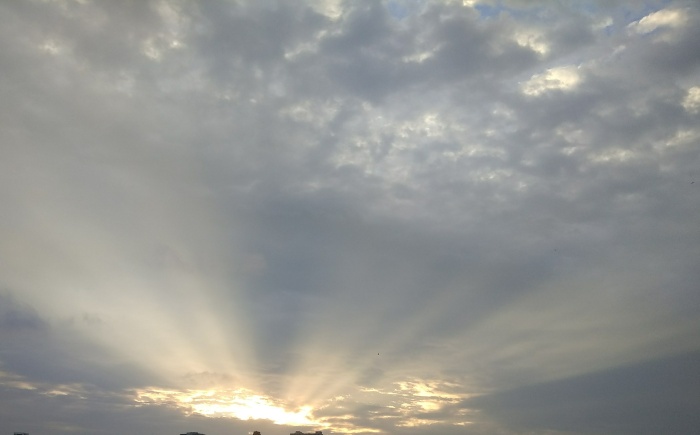 For there’s always a silver lining

She wiped off her tears as the rays of the sun brightened her outlook. They reminded her that even the darkest storms had to end. That there was always the ‘silver lining’.

Glancing above, she suddenly found that she wasn’t alone. The squirrel was still there! Atop one of the higher branches, with the sun shining right through, it cast an ethereal aura around the squirrel.

So maybe things would change for her as well. Maybe she would make the right choice and the sun would shine on her, washing away all her sorrows and enlightening her future.

All she had to do was find the courage. The courage to fly….

To be independent and free. To leave the past behind and head forward with a fresh vigour. And now she knew she wouldn’t be alone. After all wasn’t life a never ending journey, a journey which we all were supposed to embark on together?

A journey towards a brighter spring, a greener tomorrow…

As she glanced at those lush, green hilltops in the distance, she no longer looked like the broken-hearted girl who had entered the park. For now she knew what she had to do. And as she rose from the bench, she headed to do the same, with a new spring in her step.

P.S. Here’s a link to the blog that proved as an inspiration to mine. Thanks for the tip, Meher! 🙂